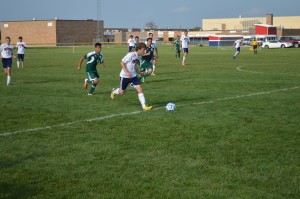 The boys’ soccer team played in a thrilling game against Jay County on Thursday night, August 21. The Patriots started  the game on a roll, stymieing the Jay County offense and dominating the possession battle. In the middle of the first half, freshman Oh Mae scored a back post goal to put Heritage up 1-0.  As the half drew to an end, Jay County had an opportunity to tie the game with a penalty kick, but senior goal keeper Taylen Melcher made an amazing save. This gave Heritage all the momentum they needed entering half time. When the second half began, Heritage had a plethora of opportunities. However, the game changed entirely as Jay County scored with a beautiful free kick. Minutes later, senior Jacob Hockemeyer scored the go-ahead goal off an assist from junior Lucas Scheumann.

Hockemeyer was ecstatic and stated,”It was easily the biggest goal I have ever scored. I knew I had to put it in the net and when it did, I just felt relief rush over me. It’s always great to get a win, but to beat a new conference rival, it just felt great.”

Jay County quickly came back with another penalty kick. Once again, however, senior Taylen Melcher was up to the task.

“My heart was pounding and I could literally feel the adrenaline running through me,” Melcher said about his clutch stops. “I knew making those stops helped us push through and fight. With that said, we couldn’t have won without the whole team playing great all around ball.”

The Patriots are  riding high after this huge game to start off the conference season. The boys’ soccer team continues their season next Thursday against the Garret Railroaders at home.