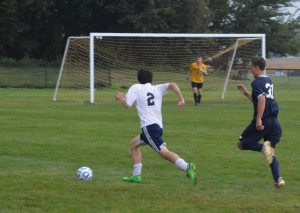 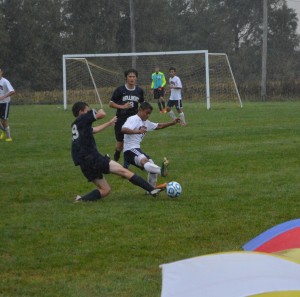 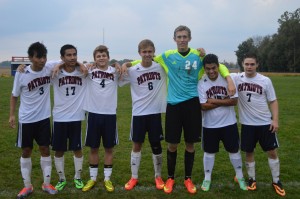 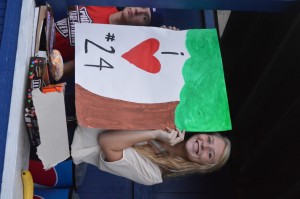 The Patriots boys’ soccer team finished up a thrilling regular season with plenty of highs and a few lows. They finished the regular season with a 7-5-3 record catapulting them to their first winning season since 2003-2004. Their final regular season week consisted of three games in four days. They played in the conference championship game vs Leo on Monday.

The Monday game vs Leo was a decisive 4-1 win for Leo giving the Patriots second place in conference. The Patriots were losing 2-0 at half and nearly rebounded after Kamdyn Klingensmith (11) scored a goal making it 2-1. Yet the Patriots couldn’t pull through after giving up 2 more goals. The score did not indicate the way the game went as Leo scored on two penalty kicks and also got a goal off a Patriot own goal. After all was said, though, the Patriots came out with a second place spot in the conference rankings.

Two days later Heritage traveled to Central Noble and had a close battle leading to a Patriot 1-0 victory. The Patriots struggled all night barely scratching out a goal in the waning minutes. Hil Sun (11) found the back of the net after Lucas Scheumann (11) served up a beautiful pass. The Patriots truly dominated the game after controlling the ball and eating up all the possession for the game. They struggled to convert on the plethora of opportunities yet came out on top. The Patriots overall held Central Noble to zero shots in the game.

To finish up an up and down week, the Patriots had a showdown against a 9-5-1 talented Belmont squad. The Patriots lost 1-0 last year in a close game that came down to the final seconds.

The story was different this year as Belmont came to Heritage and played a well fought match. As each team struggled to gain the edge, they blew multiple opportunities at taking a lead. At the half the game was still tied at 0-0. The intensity from each team turned up in the second half yet each team still struggled to get on the scoreboard. The field was wet and muddy and may have played a factor as the players were slipping and sliding all over the field. The ball was slick and hard to control. As the game was winding down the teams were still struggling to score. The game was well played even and the score indicated that as the game ended in a 0-0 draw.

Give the patriots credit as they bounced back from a losing season after losing season. They came out of the gates slow but found their groove mid season and ended a 11 year drought of losing records. Heritage begins their sectional at South Adams on Tuesday vs a Starfire squad that will be looking for revenge after losing 5-1 to the Patriots earlier in the year. If the Patriots win they will take on either Bishop Luers or Woodlan on Wednesday.