As the postseason for the wrestling programs nears, and the athletes make one final push for glory, let’s take a look back at how the regular season turned out for the boys.

The Whitko Invitational was a sixteen team match that the Patriots were invited to. James Morua led the charge for the Patriots, finishing second in his weight class. The Patriots fought hard in this meet, and saw it as a solid start to the season.

The boys also had a meet at Wabash. There, they defeated North Miami, Bishop Luers, and Tippecanoe Valley. All three squads are quite talented, and have a history of success. This meet helped the Patriots build confidence and momentum heading into the midway point of the season.

The meet at Elwood did not help the confidence of the wrestlers, however. There were 5 holes in the lineup, so they were forced to forfeit five matches. Heath Selking was the bright side of the meet. He finished the day with four wins and one loss, finishing strong despite the harsh conditions surrounding him.

Up next is the ACAC tournament. It begins on the 23rd of January, and the Patriots are projected to be a powerful force. Following ACAC play is the Indiana High School Athletic Association State Wrestling Tournament. The tournament begins on the 30th of January. Heritage’s sectional includes Bishop Luers, Snider, South Side, Wayne, Heritage, Homestead, Huntington North, New Haven, Leo, and Woodlan. They certainly have their work cut out for them, but this writer is confident that many individuals on the wrestling team can make a deep push into the state tournament. 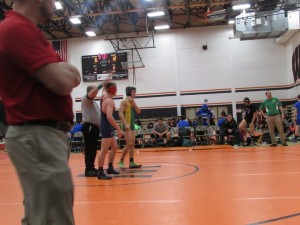