The Patriots traveled to Woodlan on Friday night for an ACAC Conference game. The two teams met just nine days prior in an exciting game during the ACAC tournament. The Patriots won the first match up by a score of 52-47.
The Patriots and Warriors were tied at 24 points going into halftime. The Heritage offense proceeded to heat up in the second half taking an eleven point 44-33 lead after the 3rd quarter. Heritage kept their foot on the gas entering the 4th quarter and continued to stretch their lead. The game ended with a final score of 61-38 embarrassment of the Warriors in their own gym. Offensive leaders for the Patriots were Billy Lomow (22 pts.), Jacque Jacquay (15 pts.), and Ryllie Schane (10 pts.)
The Patriots head back to work Tuesday against a very good 14-1 Angola Hornets team. Heritage will look to pick up some more momentum as they host conference rival Adams Central on Friday. 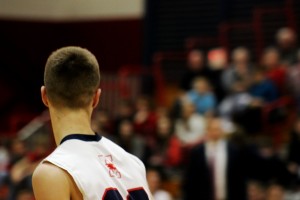